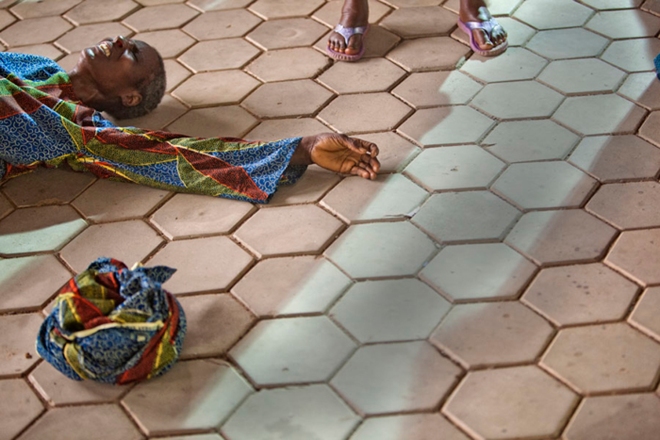 LAGOS — A pastor spits out prayers as his subject falls to the ground, writhing and contorting after a 30-day fast. Ministers form a circle around the emaciated man and douse him in anointing oil and holy water. When the prayer tsunami ends, a hovering calm ensues. A hologram glides through the man’s atrophied body as he springs to his feet, professing his salvation. So goes the standard script for a deliverance session or exorcism in Nigerian film.

Bree, whose name has been changed to protect her identity, said her first deliverance session in 2004 had none of this Nollywood drama.

“The pastor acted like it was pretty normal and routine. It was a quick 15 minutes, and nothing changed,” she said, stifling a laugh. “I felt like he didn’t realize it was a big spiritual issue, and he didn’t treat it with the weight it deserved.”

Bree, who identifies as queer and Christian, had been grappling with reconciling her faith and sexuality for most of her life. Growing up in a conservative community in Lagos where the two identities were considered mutually exclusive, her sense of God’s disapproval and abandonment had taken its toll. Her meandering from unstable to abusive relationships reinforced a belief that her queerness was wrong and something that would continually punish her.

In 2009, while attending a Pentecostal church service with her girlfriend at the time, the pastor asked women who wanted to be “delivered from the spirit of lesbianism” to approach the altar.

“I was so tired of feeling rejected by God. I just wanted peace,” she said of her decision to step forward. “I was so conflicted. You go to church and keep hearing about how lesbians and gay people are an abomination, how they are going to hell, and you don’t understand why God is rejecting you before you even had a chance to say, ‘I don’t want this’.”

The pastor laid hands on Bree and her girlfriend. Believing they were entranced in spirit, the women rolled on the ground and were surrounded by ministers.

“It was intense, and I was hopeful this was it, maybe we had been cured. I needed to not be gay anymore,” Bree said of the experience.

After a tearful breakup from her partner following the deliverance session, they got back together a week later, both exhausted from acting “healed.”

“I finally had a conversation with God saying that if this is who I am, ‘you made me, then you fix me,’” Bree said.

Bree says one of the burdens religious exorcism places on sexual minorities is the need to perform. She reminds herself to switch feminine pronouns to masculine ones when discussing past relationships with work colleagues and when writing on her blog. Once, when a colleague gave her a suspicious look for staring admiringly at a woman, Bree lied about having previously met the person to diffuse the situation.

Olumide Makanjuola is executive director of The Initiative for Equal Rights (TIERS), an organization based in Lagos that works on lesbian, gay, bisexual, transgender, queer and intersex (LGBTQI) rights and sexual health.

“In a space like Nigeria, people perform sexuality quite well. We don’t care what performance does to people mentally, as we are focused on how people see us and how they imagine us,” Makanjuola said.

Through his work, Makanjuola has encountered many people in the local LGBTQI community dealing with acute anxiety and depression as a result of performing straightness brought on by deliverance attempts and conversion therapy.

“Exorcism reduces people. They feel so incomplete and powerless,” he said. “We run a religious system that is full of condemnation as opposed to understanding, which is very problematic.”

Makanjuola emphasizes the importance of deconstructing social norms and warns about the mental health strain that can arise when people feel a constant need to perform.

Bree said her deep-seated distrust of Nigeria’s mental health system prevented her from seeking professional help when coming to terms with her faith and sexuality.

“I wouldn’t talk to a professional about it, because I’m not going to have someone validate negative feelings. The people who we talk to will fall back on culture or religion,” she said.

Addressing this lack of trust and presumed discrimination, psychiatrist Dr. Gbonju Abiri from the Federal Neuro-Psychiatric Hospital in Lagos said, “Nigeria is deeply ingrained in culture and religious beliefs, and we are not able to deal with diversity just yet as we should, though our practice encourages that we should put health above all first.”

She added that many LGBTQI patients ask doctors about their views on sexuality prior to consultations, using the doctors’ responses to determine whether or not to go forward with the appointment.

It is almost impossible to discuss the issues sexual and gender minorities face in Nigeria without mentioning the Same Sex Marriage Prohibition Act, which stipulates up to 14 years in prison for sexual orientation and gender identity expressions that deviate from cultural norms.

“As a health service receiver, you are dealing with two monsters: a doctor who is prejudiced towards you, and a service provider who is also using the law to validate their own sense of what is right. If you win with the law, are you going to win with the angle of their personal belief system?” he asked, rhetorically.

In 2012, exhausted from feeling depressed and condemned, Bree decided to study more about the intersection between her faith and her sexuality. She looked through the works of theologians, unlearning most of what she had been taught and reading stories of people who had taken their own lives when faced with similar battles.

“You can’t blame people, because there is a culture that has been handed down, but I will not accept that anybody is an abomination because of whom they love,” she said.

Bree is now working to earn a professional counseling qualification to help others who were once in her shoes. She hopes to find acceptance inside herself, and to help others do the same.

Wana Udobang is a journalist based in Nigeria.