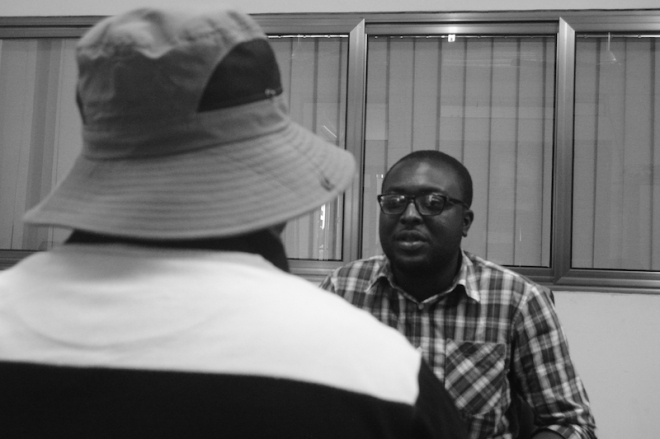 KUMASI, Ghana—On a summer afternoon in 2012, Kwasi, whose name has been changed to protect his identity, gathered the courage to confide in his school counselor Frederick Ansah.

Then 18, Kwasi told Ansah, who is also a pastor and a teacher at the school, that Kwasi had been sexually attracted to men since he was 14 and that he had had intercourse with several of his male peers.

Kwasi’s coming out that day was driven by taunts from schoolmates, who were threatening to publicize a picture of him kissing a male student at their senior high school on the outskirts of Kumasi in Central Ghana.

Kwasi told Ansah that the classmate he kissed had pretended to be gay to deceive and blackmail him.

“There was a plot,” Kwasi said. “I stupidly agreed to his proposal, believing it was genuine.”

According to Kwasi, the students behind the alleged plot knew that if school authorities ever learned of the kiss, Kwasi would be expelled, so they extorted him for 500 Ghanaian Cedi (about $120) in exchange for their silence.

“I was seeing a counselor, a religious leader. He gave me assurance. I trusted him, but he disappointed me,” Kwasi said of Ansah, who had promised to keep this coming out a secret and to help him become “straight.”

In December 2012, a witch-hunt ensued at Kwasi’s school when another student came out and was forced to identify fellow gay students.

A long list of names was pasted on the school notice board under the heading, “Due for Dismissal; Report to the Disciplinary Committee as soon as possible.”

Then 19, second-year student Charles, whose name has been changed to protect his identity, was fourth on the list. Surprised, he walked into the committee room gripped with fear but confident he would be absolved because he had not been caught or blackmailed like Kwasi.

At the hearing, Charles was shocked to see Ansah sit quietly as other members of the committee heaped accusations on him, accusations presumably based on information Charles had shared confidentially with the counselor.

Charles told the committee he had told Ansah of his same-sex attraction in hopes that the counselor would help him overcome the desires.

“I was lucky. I think it’s because of how emotionally I spoke the truth, that is why I was spared in the mass dismissal, because innocent people were also dismissed,” he said.

The Ghana Education Service Discipline Code for Students stipulates that students who are found guilty of “sexual misconduct” should be summarily dismissed.

The 2016 case of Barima, 17, and Osei, 19, two close friends at Opoku Ware Senior High School in Kumasi whose names have been changed to protect their identities, demonstrates the damage these rules can cause.

In January 2016, the two male students were accused of kissing and having sex, allegations they denied. Students wielding sticks and belts tried to attack Barima and Osei for their “unacceptable” sexual orientation.

The crowd refused to retreat until the students confessed to their “crime.” It was only on the advice of a school counselor that the mob dispersed.

“On the day we were summoned [for our disciplinary hearing], we denied all charges, but school authorities compelled us to say, ‘yes, we’re gay,’ in order to avoid being beaten to a pulp by the boys. They claimed it was our confession,” Barima said.

“The authorities did not even enquire to get evidence before they asked us to stay home for two weeks, which ended up extended to two months,” Osei added.

Both students said the incident’s emotional trauma and their lengthy suspensions negatively affected their exam performance.

“We suffered stigma. It hurt me a lot because our final exam was approaching. Even in class, people didn’t want to sit by you. Learning became difficult because you have to stay home. Some of our friends still don’t talk to us,” Osei said.

“It was very bad because school authorities asked us to go home without allowing us to take any books along. We were not allowed to go to our rooms to take anything. Their explanation was that the other boys might lynch us,” Barima said.

Frank Okyere is a researcher, student counselor and teacher at a senior high school in Kumasi.

He thinks the sexual misconduct clause in the Education Service Discipline Code for Students is unhelpful because school authorities often hide behind provisions of the code to unilaterally dismiss students accused of being gay.

“If they are accused and you dismiss them, you are not helping them express themselves. Therefore, they get to conclude that they are not welcomed in this world,” he said.

Okyere is also executive director at SEAT OF GRACE, a pastoral and counseling NGO  that tries to convert sexual minorities to heterosexual orientations, a controversial and potentially harmful practice.

Still, he suggests the discipline code be revised to accept lesbian, gay, bisexual, transgender and intersex (LGBTI) students and provide guidance to assist them emotionally rather than demonizing them.

“Education is holistic, teachers are supposed to help students in and outside the classroom. I think that particular piece must be reviewed. A regulation that is geared towards reforming students must be applied,” he advocated.

Alberta Agnes Tardie, a senior tutor at Opoku Ware Senior High School in Kumasi, describes local guidance and counseling systems as “weak and useless.” She believes this institutional weakness has contributed to the dismissal of perceived sexual and gender minorities from the education system.

“Students don’t trust counselors anymore because most of them are pastors who demonize them, at the least,” she said.

Tardie hopes that when more professional counselors are employed in senior high schools, the situation may improve.

He believes the church must work to embrace LGBT people, understand them, give them love and work on their emotions.

A November 2016 document by SEAT OF GRACE titled “Legalising Homosexuality in the World; Will Ghana join the New Order?” was recently presented to senior high schools students in Kumasi.

It flags as problematic the threats and beatings of perceived sexual and gender minorities in Ghana’s schools and society at large.

Okyere, the document’s lead researcher, says special training must be given to school counselors to equip them to be able to address sensitive matters concerning sexual and gender minorities.

The document also confirmed that sexual and gender minorities are often afraid of being demonized by the many senior high school counselors who double as religious leaders.

“I think there should be intensified education on sexual orientations in school,” Charles said. “I was lucky I was not expelled from school. It could have ended my education.”

Prince Appiah is a journalist based in Ghana.