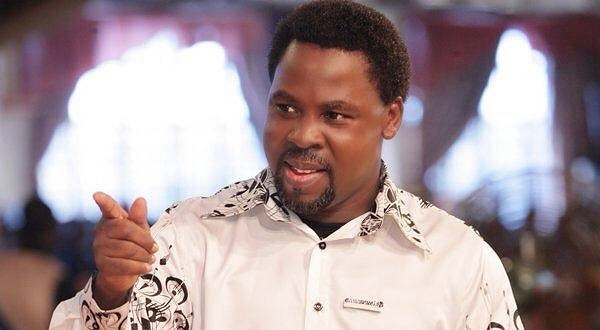 Pastor Christopher: What have you been pushing him to do against his will?

Tedus Odupute: I made him love men. Instead of loving women, he loves men…I made him gay.

LAGOS–To anyone familiar with the Nigerian movie industry, this dramatic exchange between a pastor and a businessman may well have emanated from a Nollywood film studio. Instead, the words come from a real life conversation between Pastor Christopher of The Synagogue, Church of All Nations (SCOAN), one of Nigeria’s best-known Pentecostal churches, and Tedus Odupute, a Nigerian businessman based in Cameroon.

The testy exchange took place in April 2015 at SCOAN headquarters in Lagos and was broadcast on Emmanuel TV, the 24-hour satellite channel set up by SCOAN’s charismatic leader and founder T.B. Joshua to reveal his congregation’s activities to the world.

Among those who visit SCOAN are sexual and gender minorities seeking “deliverance.” In many African societies, as is true in much of the world, lesbian, gay, bisexual, transgender and intersex (LGBTI) people are sometimes viewed with suspicion or considered to be in need of spiritual cleansing.

In his televised account to SCOAN, Odupute said he wasn’t originally gay but was “initiated” on a business trip he made to Asia. After swimming with some men he met at a hotel, Odupute said he felt “as if something entered (inside) me and I started having a passion for men and going closer to my fellow man.”

The “I made him gay” comment supposedly emanated not from Odupute himself but from the “demon” inside of him. Odupute later claimed his session with SCOAN rid him of the demon, and that his life has changed for the better.

“I have been myself, I’m so happy today,” he said after the session.

“I now have total deliverance and a real passion for the opposite sex…I have been living like a normal human being, the way I was before three years ago,” Odupute replied.

Many LGBTI community members and activists disagree with the notion that someone can or needs to be cured in the first place. They insist that sexual and gender minorities who visit churches or mosques for healing are often forced to do so by family members or friends.

Jude, an LGBTI activist whose name has been changed to protect his identity, said he knows at least two LGBTI people who underwent deliverance sessions at Pentecostal churches in Nigeria without success.

“There was a time in my life I thought I wasn’t really living right, and I went to a Pentecostal church, but at the end of the day you find out it doesn’t help matters because they are just going to tell you that you are evil, you are possessed, which you are not,” he said. “[Deliverance] doesn’t last because these people would go back to their lifestyle.”

Another member of the LGBTI community, who also requested anonymity for security reasons, said some of those who visit religious centers in search of deliverance are lured by monetary rewards from the churches. Real sexual and gender minorities have no reason to seek deliverance, she insisted.

Fagbohungbe Oni Bamikole, a lecturer in the Department of Psychology at the University of Lagos, says that while “the act of cleansing people who are possessed by evil spirits is as old as man himself,” he believes such acts can either be “real and true cleansing” or “phony or stage-managed healing” depending on the persons involved.

“I have personally witnessed real and true deliverance in life,” Fagbohungbe claimed, drawing a distinction between what he believes to be “phony” “deliverance by arrangement” aimed at attracting “multitudes into the church” and extorting “money from unsuspecting victims” from what he considers a more genuine practice.

For Fagbohungbe, from a psychological perspective, the issues of religion and deliverance may boil down to individual belief.

“If a man defines a situation as real, it becomes real in its consequences. In Christianity, it is called strong faith, i.e. you receive, you believe and you become,” he said.

Fagbohungbe listed some of the potential psychological effects of healing or deliverance sessions, including “anxiety, neurosis or agoraphobia … triggered by the memory or any activity that symbolizes the purportedly cured evil spirit.”

Justine Dyikuk, a writer and communications director of Bauchi Catholic Diocese, Nigeria, said the use of electronic or social media for evangelization can be good but  should not be used for miracle sessions, as doing so “amounts to propaganda, cheap popularity or seeking membership, which is often tied to monetary gains.”

“It is God who gives healing powers to the Church,” he added.

Although SCOAN says it publicizes its activities on Emmanuel TV in order to glorify God’s work, church officials declined to speak about LGBTI-related issues when contacted for comment. A source within the church who requested anonymity said the church does not bill beneficiaries for its healing sessions but that people who feel they have benefited from the church’s services are known to willingly show appreciation in the form of financial or material gifts. Church members also tithe. Such donations are believed to account for the wealth of T.B. Joshua and other Nigerian Pentecostal pastors, whose individual net worths exceed billions of naira (tens of millions of dollars).

Anthony Akaeze is a journalist based in Nigeria.