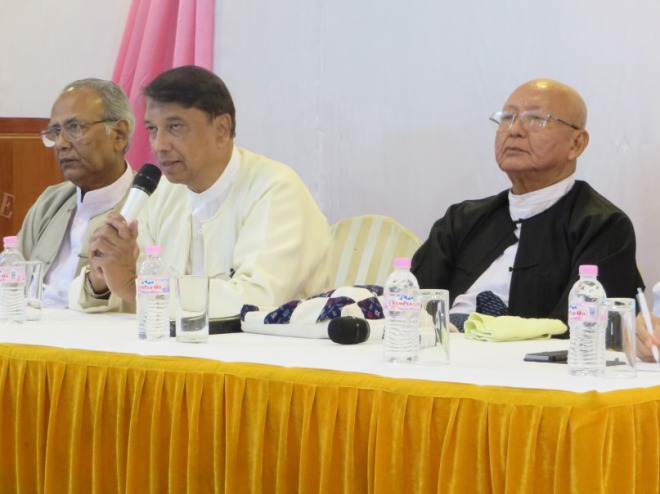 Click play to listen to this radio story in Myanmar (Burmese). This story was produced as part of Religion Newswriters’ religious freedom and conflict reporting training program in Yangon, Myanmar in November 2014 with support from the British Foreign & Commonwealth Office.

Dr. Hlaing Bwa, a Christians professor at the Myanmar Institute of Theology, says these conflicts are rooted more in politics, economics and racism than in religious differences.

“Faith is an important foundation for survival. It guides people to make the right decisions, so it is quite divine. Conflicts have broken out not because of misunderstanding between different views on religions. They have broken out due to other influences, a movement linked with propaganda. There is no religion on Earth that teaches hatred or destruction or tells people to burn down others’ properties.”

Dr. Ashin Dama Pe Ya from the Nga Gyin Pyan Buddhist monastery in Thingangyun Township, Yangon says that real peace can only be achieved through mutual respect, not through provocation.

“If you want peace, minorities should respect the majority and vice visa. If we can focus on mutual understanding, respect, learning history and Metta — love and kindness — as per Buddha’s teaching, we will have more peace. If you say or do as you like in the name of human rights or freedom of religion, there will be more conflict. We should help, respect and give Metta to each other. If you are Buddhist, you should follow basic precepts. If you follow social rules, alleged rape cases like what was reported in Mandalay won’t happen. If you don’t want your religion insulted, you should treat others with respect. I must say this. I think it is impractical and unfair to use ‘human rights’ to accuse others of extremism.”

On the topic of controlling extremism, U Aung Naing, who is Hindu and an executive committee member of Religions for Peace in Myanmar, says education is crucial.

“We must educate extremists and approach them with love and kindness and let them know that their extremism can negatively affect others in their religion. In a way, extremism is caused by a lack of knowledge or education. We should try to help extremists learn and think practically. It is best to educate them and to advocate for peace. We should teach them that violence leads to chaos and misery. If they commit extremist acts for the sake of a particular religion it hurts the reputation of other people who share that religion, be it Christianity, Buddhism or Islam.”

U Aye Lwin, chief convener at The Islamic Centre of Myanmar and founding member of Religions for Peace in Myanmar says that the misuse of religion can endanger communities.

“Religion is very gentle, fragile and sensitive. It is quite dangerous to play with. If someone misuses religion to persuade or inspire others, we should not fall into that trap. To avoid it, we should focus on our respective religious teachings. If something is extreme, not only in religion but also in everything, it will be bad in nature.

There is teaching in every religion about liberalism and neutralism, which is the opposite of extremism. But there are people who do not follow these religious teachings, which can change their lives. We should not see them as representing a religion. They might blame their wrongdoing on unfair systems or repressive conditions. We should think seriously and treat them with mutual respect and fairness so that they have no chance to organize or persuade the innocent youth to follow their lead. Because there is no faith in accepting extremism, they will soon fail.”

Although diverse in their faiths, these leaders agreed that religion is so sensitive in Myanmar that the best way to stop conflicts and hatred will be to avoid extremists’ provocative measures and to promote love and kindness within society.

This story originally appeared on RNS as part of a series on religious freedom and conflict, brought to you with support from the U.K. Foreign & Commonwealth Office.

Ei Ei Htwe is a journalist based in Myanmar.