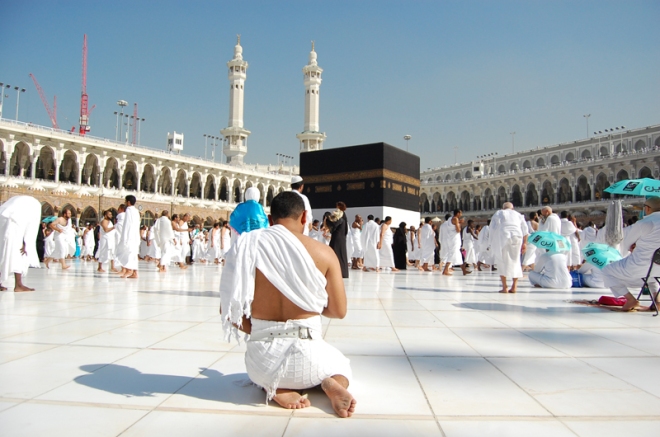 NEW YORK — Among the 2 million Muslims who flock to Saudi Arabia each year for the hajj pilgrimage, Parvez Sharma’s journey stands out.

He filmed his 2011 trip despite strict prohibitions against camera use at holy sites in Mecca, and he’s openly gay, a crime punishable by death in the desert kingdom.

“Contemporary Islam is at war with itself, and I have fought hard to not be a casualty,” Sharma says in “A Sinner in Mecca,” which premiered to hundreds of viewers in New York City on Friday (Sept. 4).

Sharma’s latest autobiographical documentary strives to highlight the complexities of his religion.

Video courtesy of “A Sinner in Mecca” via YouTube

“I’m still a little shaken from it all,” said New York resident Mamta Prakash after watching the premiere at Cinema Village in the West Village. “It really brought across his strong faith and love for Islam and was extremely moving.”

The documentary opens with clips from Sharma’s marriage to his husband at City Hall in Manhattan. He grapples with his identity as a devout Muslim when many fellow Muslims condemn his wedding. He is faced with what he calls a crisis of faith.

“I need evidence that my faith is strong enough to survive this journey,” he says.

Equipped with an iPhone 4S and two small cameras, Sharma then takes viewers on one of the largest human pilgrimages in the world. “I was terrified, I was absolutely terrified,” Sharma said. “I even wrote my will before I left because I did not know if I would come back alive.”

In the film, Sharma comments on Mecca’s growing commercialization, calling it the “Mecca of capitalism.” After prayer rituals at a holy site, he finds himself in a crowded Starbucks at a huge adjoining shopping mall.

At one point, Sharma meets a Pakistani man who had come to Mecca to be forgiven for participating in an honor killing of his brother’s wife. In another scene, Sharma reveals his sexual orientation to an American pilgrim who asks, “Why would you want to be part of something that does not want to be part of you?”

“The film was a beautiful insight into a very personal account of a religious journey,” said Meenu Mahajan, a New York resident from India who watched the premiere. “I felt it was a privilege to observe this private, religious expedition.”

In the film, Sharma condemns the Saudi government’s strict interpretation of Islam, which he says promotes the dangerous ideology that produces groups such as the militant Islamic State. Sharma takes viewers to what he calls the “front line of Islam”: a growing dissonance between its peace-loving majority — who come to Saudi Arabia to complete the hajj, a once-in-a-lifetime religious obligation required of all able-bodied Muslims — and government-supported violent extremists.

Sharma’s conclusion in the film is complex, if not revelatory. The hajj teaches him to reconcile his sexuality and faith from within.

“It’s not about Islam accepting me,” Sharma says near the end. “It’s up to me, as a gay Muslim, to accept Islam.”

The film has met both acclaim and criticism.

“There is an enormous amount of debate and discussion about it,” Sharma said. “Scores of people have responded positively at festivals, and that has been heartening. But what has not been heartening is this enormous amount of hate mail and death threats that I seem to wake up to every day at this point. Being at the receiving end is really challenging. It’s very hard to not internalize what is coming your way.”

Sharma launched an Indiegogo campaign to raise funds for his movie to be distributed to the broader Muslim world. It will open in Los Angeles later this month and will be available on iTunes by October.

Meanwhile, he lives with his husband in New York and hopes his film helps broaden the conversation both within Islam and among its critics.

“There is this tendency to demonize anyone that is Muslim and to think that every Muslim susbscribes to a particular ideology of violence,” he said. “People like me try as hard as possible to educate non-Muslims.”

His film, he hopes, is an offering toward that end.

Rachel Lowry is a journalist based in the U.S.